Strategy for a Successful Site Launch

One of the most critical times for SEO on a B2B website is immediately after a site redesign, CMS change or major shift in content. At Obility we have been through a relaunch with nearly all of our clients and have seen them go well and, occasionally, poorly. We’ve found what separates a good site launch or redesign from a bad one comes down to preparation and perspiration. A good strategy and some hard work by both your SEO agency and your web team will result in improved organic traffic after post-launch. Without a plan and a willingness to roll-up your sleeves, you are almost guaranteed to see rankings drop, traffic decrease and fewer leads from organic search.

Example of a good relaunch 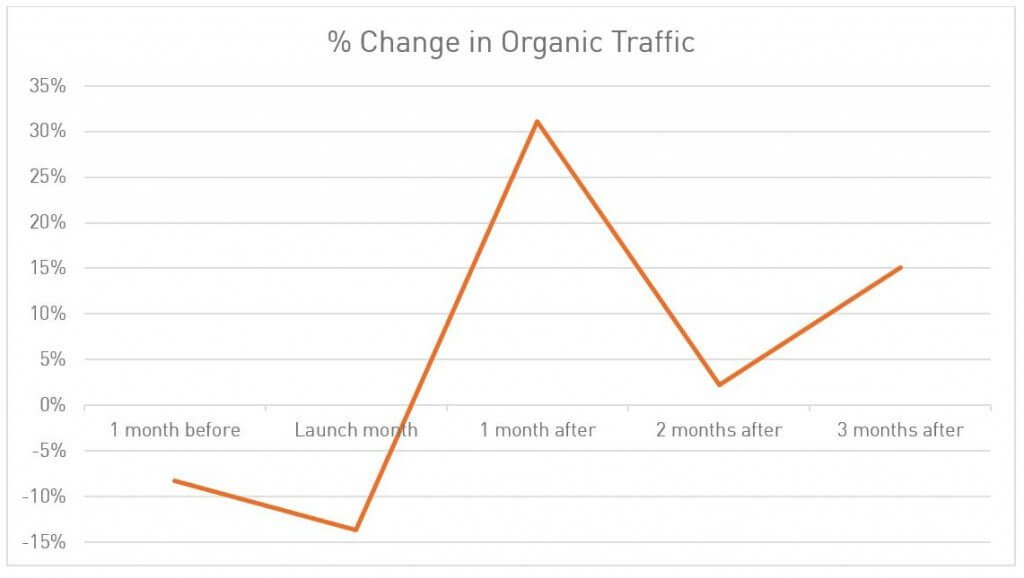 So what does a good site relaunch look like? One Obility client relaunched their site at the beginning of 2020 and saw great success from both an SEO and overall site perspective. This relaunch involved a change of CMS, complete visual redesign of the site and a full restructure of the existing site content.

Our client used an external development agency but insured that Obility was involved in the entire process. We followed the process above, and Obility was given significant responsibilities for insuring the site was ready to launch from an SEO perspective.

As a result, in the three months after the site launched we saw significant improvements in traffic to the site, including a 31% improvement in organic search in the month following the relaunch.

Example of a bad relaunch 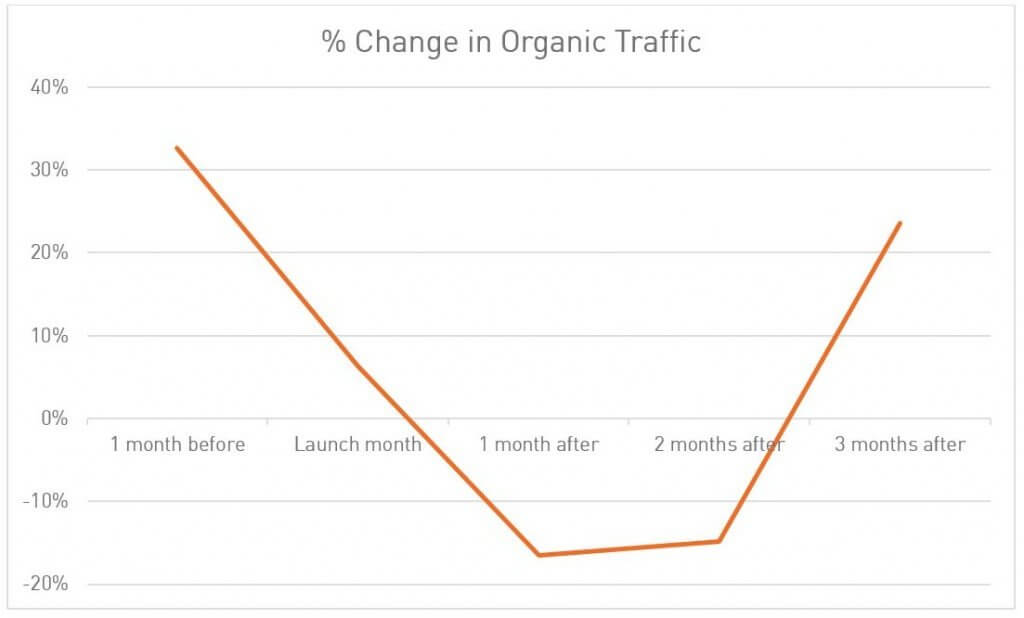 In another case, a client told us about a site redesign and content refresh just days before it happened, leaving no chance to evaluate or make changes to the proposed content. A new branding and product positioning was implemented in this content refresh and, without any keyword research, some keywords that were driving significant organic traffic and leads were left off the site completely. There were also technical issues introduced in the launch that could have been addressed prior to the launch.

Based on the learnings from working with a variety of clients across different types of site relaunches we’ve developed a strategy that maximizes the chances for success and improved organic search results.

As soon as a relaunch is discussed, getting buy-in from everyone involved in the project that optimizing for SEO is an important part of the project is critical for success. A strategy for launch is essential. It’s important to make clear the current impact of SEO on-site traffic, goal completions and on downstream metrics such as leads and revenue. Understanding project timeline, everyone’s role on the project, key stakeholders for the relaunch project and what constraints and roadblocks exist is also important. For example, it may not be possible for an SEO agency to get access to a pre-production version of the site.

A relaunch is an excellent opportunity to reevaluate the keywords being targeted by your current SEO strategy. This is sometimes driven by the necessity of a shift in the brand and product messaging for the relaunch. Even if the plan is to keep the content reasonably similar, a relaunch represents an opportunity for a keyword refresh. The SEO team (both internal and agency) should work closely with the product marketing team and content writers to understand any changes to the content and to get access to early drafts of the content. The SEO team should then conduct keyword research to see if any new keywords should be incorporated into content. By doing this early in the process the product marketing and content teams can incorporate suggestion in the content creation process without much trouble.

Closely related to the keyword refresh is an evaluation and refresh of the content currently on the site and any changes planned to the site content. In most relaunches there will be some consolidation of content and some new content created. It is important to understand which pages are working on a site from an SEO perspective (good ranking for targeted keywords, good organic goal conversion rate) and make sure an equivalent pages exists on the new site.

We’ve also found success in looking at each and every product/service/solution page and making sure that optimized titles and descriptions are in place. A site relaunch also represents an opportunity to address content issues that were previously present because almost any content change is up for consideration.

One of the often overlooked aspects of insuring good SEO for a relaunched site is involving the SEO team in user acceptance testing (UAT) or quality assurance (QA) testing. The SEO team can identify issues with both content and technical SEO issues that are often missed by other teams focused on other aspects of the site relaunch. Since UAT or QA time periods typically involve a time for fixing high priority issues prior to site launch, this is an absolutely critical time to surface issues that could negatively affect SEO for your site. With proper buy-in from stakeholders it is likely these issues will be resolved prior to launch.

While keeping an existing URL structure in place is preferable, it is likely that some existing content will be removed from the site, or that a relaunched site will have some changes to its URL structure.  Both of these scenarios will necessitate adding 301 redirects from the existing URLs to the equivalent URL on the new site in order to maintain search ranking. As part of the buy-in process it is vital that the SEO team understand who will be responsible for implementing 301 redirects and if there are any limitations as to the number of 301 redirects that can be put in place.

Knowing whether a site launch has been a success and where there is room for improvement is absolutely dependent on having good benchmarking and metrics monitoring in place. We’ve found that having a shared Google Sheets document with a basic set of metrics compiled, and checking on these metrics a weekly basis after launch is the best way to highlight possible issues with the site. This should also includes tracking the rank of target keyword as this will help highlight keywords that weren’t addressed in the relaunched site’s content.

Even with the early and full involvement of the SEO team in the site relaunch process and a rigorous UAT and QA process, some SEO technical issues are likely to sneak into a new site. One of the first tasks for the SEO team post-launch should be to run a full SEO technical audit. In the past we’ve found significant duplicate content issues on a client’s site that simply weren’t visible on development servers. In another case we found a number of pages were retired without 301 redirects being put into place as the SEO team had requested. It is important to address these technical issues immediately following the launch for two reasons. First, the sooner any technical issues are resolved, the less the chance that there will be any negative impact on organic traffic. Second, development teams are likely to be much more responsive to issues brought up immediately after launch, and there is often a “warranty” time period after a site relaunch in which the development team has extra resources devoted to solving issues.

Noah Brimhall is Director of Services at Obility where he leads the Paid Search, Paid Social & SEO teams. Prior to joining Oblity, Noah was SEO Manager at Hewlett-Packard, where he oversaw improvements in traffic from organic search. Like all Portlanders, in his spare time, Noah makes cider, gardens, cheers for the Timbers and rides his bike. View all Noah Brimhall’s posts >