How Long Does SEO Take?

We all know that SEO is a long-term process. If you have worked with SEOs, you have probably heard the marathon analogy multiple times: SEO is not a race, it’s a marathon. But how long will this marathon be exactly?

The main performance metrics that will indicate the success of metadata optimization are click-through-rate and organic traffic.

The example I am using below is from a client who had around 150 metadata errors, including missing meta descriptions, duplicate title tags, and title tags exceeding pixel limit. The metadata errors were fixed gradually in Q3 2020 and the website has been completely error-free since November 2020. 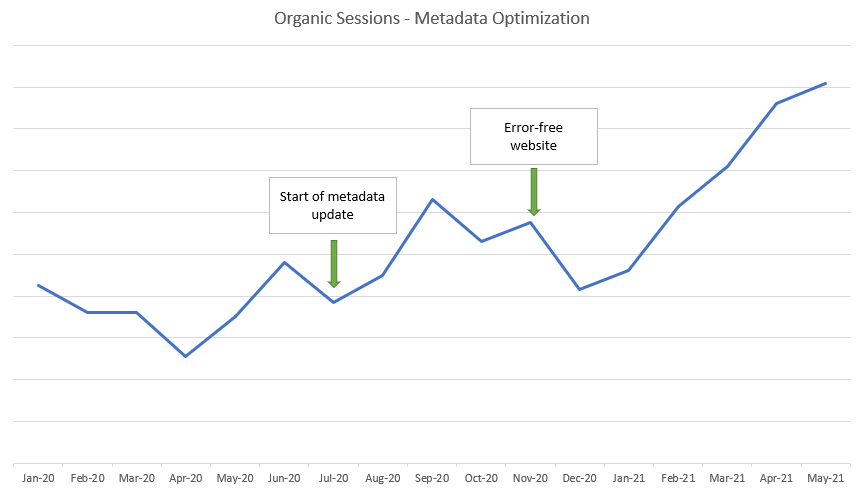 The performance started gradually improving starting 2 months after the first optimizations and has been growing steadily 3 months after being fully fixed. This also shows that addressing all metadata errors will result in faster, steadier improvements than a partial fix.

For this section, I looked at a client’s blog performance. The first implementations were made on 07.10.2020, the first notable improvement in traffic started in August 2020. The optimizations were fairly consistent until November, then stopped until March 2021. As a result, the organic traffic grew steadily until 4 months after the latest optimizations, then started dropping. April 2021 was very prolific and we saw the organic traffic increase again as a result in May. 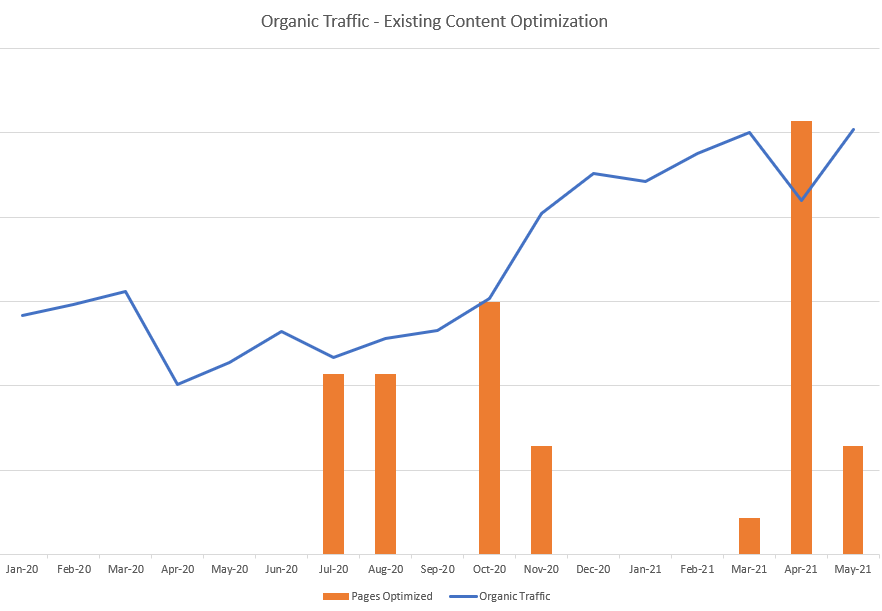 New content creation is one of the SEO strategies that will take the longest to yield results, but it is also one of the most effective.

As we can see from the chart below, the new page created in May 2018 didn’t start getting traffic until September 2018, 4 months later. However, the trendline shows that the organic traffic has been growing exponentially since then. 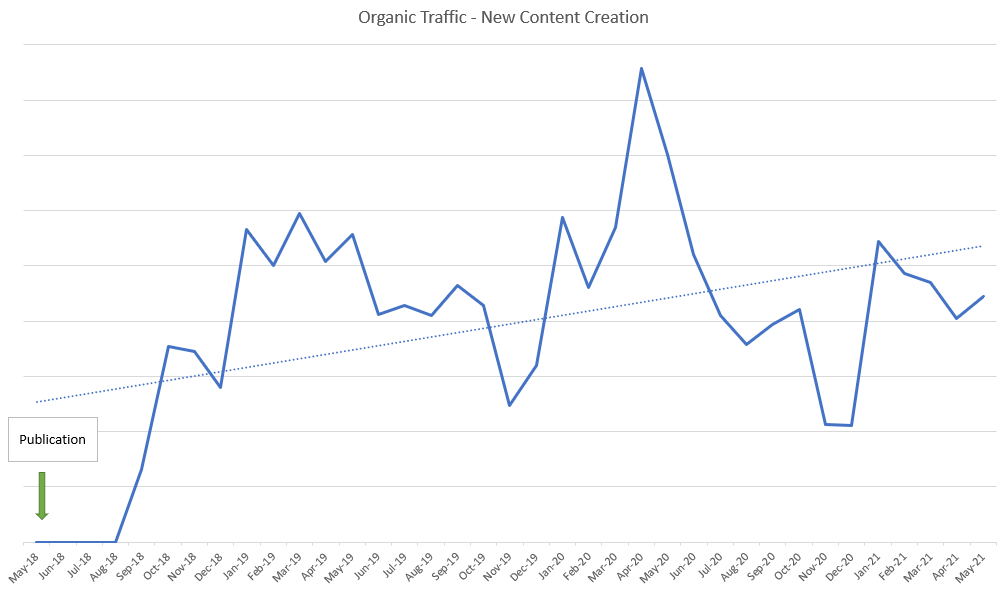 The goal of internal linking optimization is to improve user experience, which can be measured by looking at the bounce rate. A lower bounce rate means less people leaving the website after viewing only one page.

In this example, I’m looking at all users data, not just organic, since all visitors are impacted by these changes.

The first internal linking updates were made in March 2020 and have been a part of our ongoing SEO strategy since then. A small decrease in bounce rate can be seen a month after the first updates, but the more notable decrease started at the two-months mark. 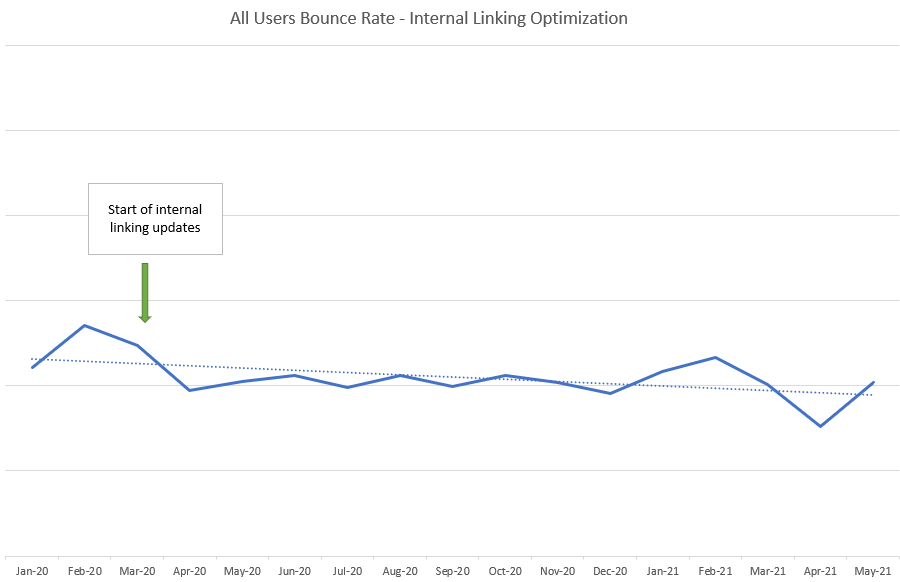 In this example, we updated the CTA on the client website to be more eye-catching and we removed the form pop-up to a static form. The update was made in October 2020, a small decrease in conversions happened right after the change, but starting  February 2021 (month 4), the number of CTA clicks and conversions has jumped up. 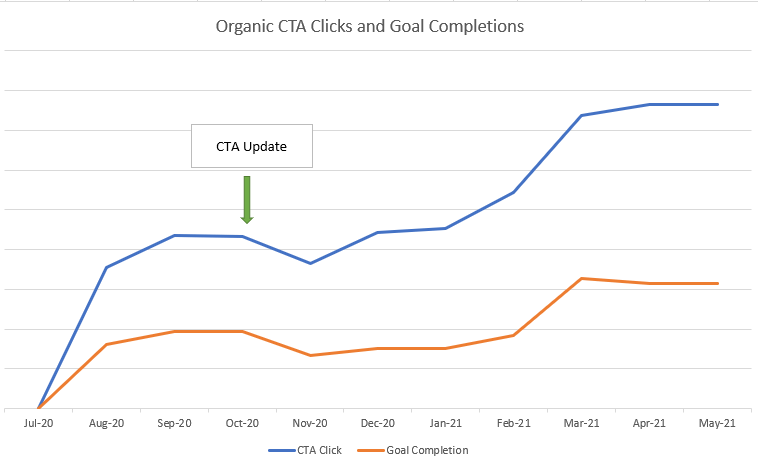 To conclude, the research has shown that it will take an average 2.7 months to see the fruits of your SEO labor. In addition, different projects will improve performance at a different rate:

Remember that SEO isn’t an exact science, the speed and the significance of improvements will depend on a few things: your starting point (if your website is already in top technical shape fixing technical errors will not significantly improve performance), the regularity of your SEO implementation and your competitors. SEO doesn’t work in a vacuum so to be able to move up in the SERP, you will have to take someone else’s place.

Unlike other forms of digital marketing, SEO is not an off-and-on process: patience and consistency are keys to a successful SEO strategy. Don’t get discouraged if you don’t see SEO results right away and remember to be consistent with your optimizations.

I will leave you with a great metaphor from my fellow SEOs Rhianna Hixon and Bryce Hanson: think of SEO as a river made of many small currents, at first fixing metadata or publishing a new blog post might not seem like much but each trickle adds up to eventually create a flowing river.

As an SEO Supervisor, Joyce helps her team and clients identify their SEO needs and develop effective strategies to improve their SEO performance. Originally from France, she has been living in North America since 2011. View all Joyce Collarde’s posts >